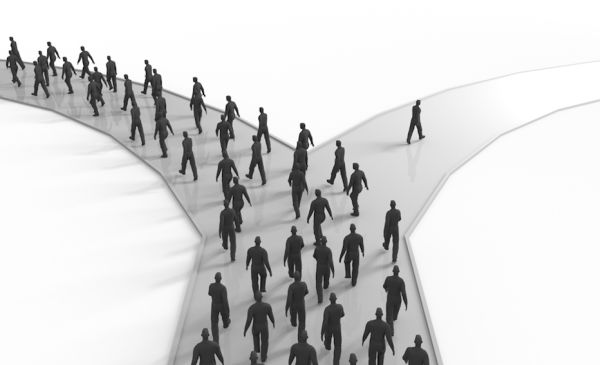 Positive, innovative and new experiences form one of two aspects that makes surprise important to the brands that have becomes successful in this new digital era.

The other aspect is the mutability of these brands: the ability to change into something not initially anticipated. This change can come from within, when the brand managers choose to re-define it so that the brand stands for something new. The new perception develops gradually in the minds of people outside the organization.

With start-ups, this change of business and brand idea is called pivoting. It is usually caused by new discoveries about how users perceive the startup’s product or services and what their preferences are. Beta-testing the first version of a product usually results in a lot of customer feedback and this feedback often leads to changes in the product. Sometimes, these changes are huge and fundamental, such as when the feedback reveals that the customers want something very different from the product created by the founders of the start-up.

The most interesting change of brand perception is the one that takes place in the minds of a group outside the company, without help from the brand owners or managers. The brand owners are then just following up on the change in approach, product range or perception of the brand in people’s minds.

Adidas is a good example of this. When the brand was in decline against its competitors and close to dramatically losing strength in the minds of traditional sports users and customers, the brand and its signature striped sportswear became a totally unexpected and cool way for urban teenagers in New York to express themselves. Adidas cleverly took advantage of this and amplified the classical brand, turning Adidas once again into a trendy brand. This led to a new perception of the Adidas brand among its traditional, core sport audience. Luckily, the brand owners didn’t make the mistake of over-doing this positive change. Instead, they held off intervening too much and softly supported the process, playing along with it and gradually using it to restore the brand’s position within its primary core market.

If you take a look at the most successful brands of the first 15 years of the 21st century – Facebook, Google, Apple, Starbucks, etc. – these brands were all initially unexpected, from a branding standpoint. Maybe this goes for business in general when introducing a new brand, but some new brands just follow up on already existing trends. In any case, it is certainly a truth in branding that the biggest successes are unexpected.

When many brands are set up, they anticipate certain things, like a certain target audience, a certain usage or having certain sought-after features and attributes. But in the end, the behavior of customers and users that is not anticipated often becomes the most important factor. Either the way people use your product or service is not what you expected, or the aspects people prefer, like, or endorse about your brand are different from what you initially anticipated. One example of this, among many, is the Ford Mustang.

It was originally created for young college students, but attracted mature men who liked to feel young and sexy. Even though the Ford Mustang’s production costs were kept lower than the costs of most other cars, it remained too expensive for the college students.

A lot of brands have products and services that were supposed to be used in a certain way, but that were instead used in an unforeseen manner that turned out to be the real success for the brand. One example is Viagra, or sildenafil as it is officially known within the pharmacological industry. It was originally developed as a treatment for hypertension, angina and other symptoms of heart diseases. But while phase one clinical trials revealed that the drug wasn’t great at treating the intended conditions, male test subjects experienced a rather unexpected side effect. A few years later, in 1998, the drug took the market by storm as a treatment for penile dysfunction, and became an overnight success. Between 2009 and 2013, Pfizer’s annual financial reports list revenues of about $1.9 billion a year (Pfizer, 2016).

Another example of a brand and product where the attributes and features that were supposed to lead to success, didn’t, is Coca-Cola. This icon of transaction branding was originally invented as an alternative to morphine addiction, and to treat headaches and relieve anxiety. Coke’s inventor, John Pemberton, was a Confederate veteran of the Civil War who himself suffered from a morphine addiction due to his injuries. He first invented Pemberton’s French Wine Coca as a sweet, alcoholic drink infused with coca leaves. It would be another two decades before that recipe removed the alcohol and was honed, carbonated and, eventually, marketed into what it is today: still the most popular soda in the world.

In the modern start-up world, this phenomenon of designing something that is not used as planned, but instead becomes something else more successful, is called a pivot (a turn-around). A pivot is today considered a rather common and cool thing. Seasoned venture capitalists (VC) even talk about the importance of a start-up team having a ‘plan B’, because the experience in the VC world is that plan A seldom leads to success, but that the alternate plan B does. My opinion is that a pivot shouldn’t be considered that cool. It actually represents a failure in finding out, first, what the customer needs and, second, what will be attractive and liked.

The Blake Project Can Help: Build your business and brand advantage in The Brand Positioning Workshop